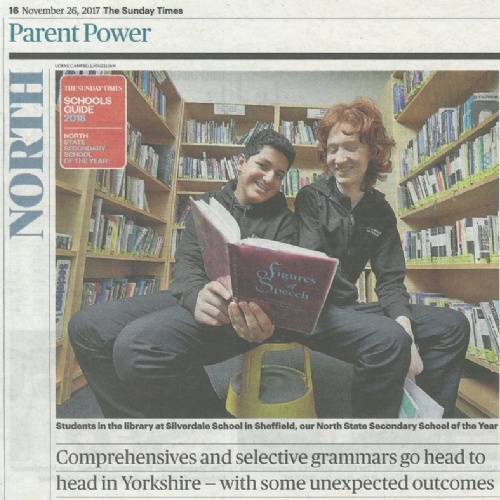 We are delighted to announce that the Sunday Times has named Silverdale School, our founding school,  'Top School of the North'!

They released the news as part of their annual Parent Power supplement, which identifies the 2,000 highest-achieving schools in the UK, ranked by their recent examination results. As part of this they have named Silverdale as the top state secondary school in the north of England.

"Silverdale School is today named North State Secondary School of the Year. After making big gains last year to move into the national top 200, it has hung on to them this year and even seen a marginal improvement in the proportion of A*-B grades gained at the toughened-up A-levels this summer. At 71.2%, Silverdale's otucomes are barely a percentage point behind those achieved at Ermysted's School, in Skipton, one of the county's most prominent selective grammars".

The 25th edition of Parent Power identifies the 2,000 highest-achieving schools in the UK, ranked by their recent examination results. A fully searchable database by school name, local authority, town and postcode, together with new regional rankings are available to Times and Sunday Times subscribers at: thesundaytimes.co.uk/parentpower

“For any school to maintain consistently excellent academic outcomes in a time of huge change in examinations and course content, is an excellent achievement. Silverdale offers children the opportunity of a great education in the best comprehensive tradition.”

As well as assessment of all academic results on a school-by-school basis, Parent Power enables parents to compare the performance of a given school with other schools in the same town, local authority or nationally. There are also live links to school websites and schools’ most recent inspection reports.

Parent Power is widely acknowledged as the most authoritative survey of the country’s best schools. The rankings in the secondary school league tables are determined by the percentage of examination entries gaining A* to B grades at A-level this summer (which is given double weighting) and the percentage of entries returning A* and A grades at GCSE. They are published several weeks ahead of the official Government tables for secondary school performance.